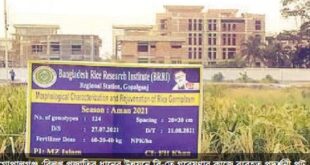 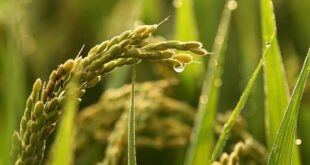 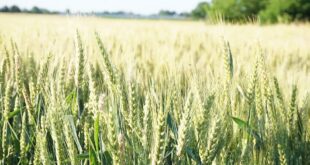 Kanihati village of Hajipur union in Kulaura upazila of Moulvibazar. Paddy fields are now in the horizon of this agricultural village. The golden crop is swaying in the dewy air. Tensions are running high over two bighas of land in this village. Because the paddy of this land is not common, this paddy is of different nature. The crop will be harvested in a few days after the amazing ripening. Then a new history will be created from the secluded Kanihati village. Once planted, the rice plant yields five times a year.

This new variety of rice has been innovated by Dr. Abed Chowdhury, an expatriate rice researcher and geneticist from Australia. He said that the paddy planted as boro at the beginning of the year has ripened after 110 days. The same plant has grown Boro once, Aus twice and Aman paddy twice in 45 consecutive days.

Scientists have said that the occurrence of five fruits in one plant is rare in the world. However, Dr. Abed Chowdhury is trying to take his innovation further. He has announced that he will continue his research on harvesting the same plant six times. Besides, he will check whether it is possible to cultivate the new variety of paddy all over the country. Therefore, experimental cultivation of this paddy will be done in different districts.

According to Dr. Abed Chowdhury, the production of this paddy which is ripe in less time is more and the cost is also less. However, the yield in later crops is slightly less than the first crop. But the combined production of five times the yield is about five times higher.

Dr. Abed Chowdhury, a son of Kanihati village in Kulaura, moved to Australia after completing his higher education in agriculture in the United States. He has spent 20 years researching rice genes as the chief rice scientist at the National Research Institute. So far he has innovated about 300 new varieties of paddy. Although he has done research in foreign lands for professional reasons, he has set up a farm in his village Kanihati in the country.

Dr. Abed said, ‘Paddy plants do not have the good fortune to survive year after year like mango and jackfruit – I could not accept it in any way. So I went down to research. ‘

Dr. Abed has been experimenting with the second birth of paddy for 14 years. In December 2010, he started research on 20 varieties of paddy in a 25 sq m field in Kanihati village. Among them were varieties of rice from China, Philippines and other countries. He separates the varieties of paddy which are harvested after ripening and then the sheaf of paddy comes out again. Thus out of 12 varieties. After cultivating the varieties for three years, he saw that they were yielding regularly for the second time. He then began to study the yield of the same plants for the third time. He succeeded in that too. But all but four of these varieties are destroyed by the fourth crop.

Dr. Abed said that four varieties are yielding five times from the same plants. Research on these four varieties has been going on for 10 years. These four varieties of Boro paddy were planted in two bighas of land in January this year. Quantitative urea fertilizer is applied. With proper irrigation and care, the crop grows to a height of 85 cm to one meter in 110 days. Later, the paddy was cut at a height of 35 cm from the ground.

According to government estimates, the country produces three to four tonnes of paddy per hectare. Dr. Abed Chowdhury said, ‘This is a historical event. Historical not only for Bangladesh but for the whole world. I was able to do this with the help of farmers from my own village Kanihati. Since it gives paddy all year round, it can be called perennial. This is because the life of rice usually ends after one season. But my innovated paddy Bora, Aus and Aman have been harvested for three seasons or the whole year. ‘

He said paddy is usually planted once and harvested after 120 days. Thus we have boro, aus and aman paddy. The rice I innovated was planted as a boro at the beginning of the year. Then gave a boro, two aus and two aman. Every time the crop is harvested and taken home, the tree grows bigger. This is a landmark result. This time after a few days the paddy will be cut for the fifth time and the trees will be left. Research will be done to bring more yield from this plant.

Regarding the naming of new paddy, Dr. Abed said that paddy comes out of the body of the same tree five times. As a result, he wants to name this paddy ‘Panchabrihi’. Explaining the naming, he said that paddy is called brihi. Since it has yielded five times, I would like to name it ‘Panchabrihi’. If the next sixth fruit is given, it can be named as Sasthabrihi. However, he has not yet finalized the name of this rice.

He said the paddy can be planted at any time of the year. Now the next steps are producing a little less. I will try to get more yield.

Elaborating on the invention of paddy yielding for the fifth time, Dr. Abed said, “I have innovated other varieties of paddy before.” I also innovated paddy that is harvested twice; the international media called it ‘Rice Twice’. Again, many have said ‘life-enhancing rice’. This is the first time I have had another rice variety in the field for the whole year. These rice seedlings have to be planted at a distance of 5 cm. As a result, the plant can grow well with energy from the soil and several more paddy plants can grow from one paddy plant.

Referring to this environmentally friendly paddy, he said that every time a land is cultivated, methane gas and carbon dioxide will be emitted. Twice-yielding crops will reduce the cost of production as well as reduce carbon dioxide emissions and contribute to climate change.

Regarding the delivery of these varieties of paddy to the farmers of the country, Dr. Abed said, it is easy to collect the seeds of this paddy. Farmers can do it themselves. Like other paddy, seedlings have to be picked up and planted after sowing in the seedbed.

He said, ‘For now, I will do experimental farming in Kanihati at my own expense. Then we will cultivate all over the country. After analyzing the results of the whole country and completing various scientific and legal processes, I will think about distributing rice seeds among the farmers.

While Dr. Abed was in Australia, he assigned a man named Russell Mia to look after everything. Russell Mia said, there is no chita in this rice. Cost is low and yield is high. After planting boro in the land, the land no longer needs to be tilled. After cutting the paddy to a certain size, we select the herbs and grass in the wrapped part and give fertilizer. Once this is done, the rice plants start growing again.

If you catch insects, you need to use a little pesticide, Russell said. This paddy cannot spoil the rain. Very hard rice plant. Farmers of the area have become interested in cultivating this paddy after seeing its yield.

Kulaura Upazila Agriculture Officer Mohammad Abdul Momin said, “I have seen five times new paddy production in one plant.” This is good news for the country. This innovation should get state recognition.

Dr. Mirza Mofazzal Islam, newly appointed Director General of Bangladesh Atomic Agriculture Research Institute (BINA), an internationally renowned scientist and eminent agriculturist, said that it is possible to get four times the yield of a paddy tree by regeneration method. However, it is a little difficult to get the yield five times.

According to Dr. Mirza Mofazzal Islam, after the first harvest, the next time the yield decreases. This is why it is not so profitable. Until then, it will be profitable to cut this paddy and plant another crop. It is better to have maximum yield of one plant twice. In this way more research can now be done to increase fruit.

“It’s not the job of a geneticist,” he said. Agronomists and soil scientists can do research on increasing yields. All management including soil, trees, reproduction, biochemistry and genes must be seen. Dr. Abed Chowdhury is just looking at Jin’s condition. Profit and loss must be calculated. Not only if you innovate, if the yield is not promising, the farmer will not take it.

Dr. Mohammad Shahjahan Kabir, Director General, Bangladesh Rice Research Institute (BRRI), said that it is possible to harvest more than once from one paddy plant, but the yield will be less. This is not a sustainable innovation. Where we are trying to produce more on land, there is no point in innovating cost-cutting technology to save costs. We have talked to Dr. Abed Chowdhury about these issues more than once. We invited him, but he did not come. We have been studying science for 50 years. I am working on various issues including increasing the yield of paddy.

Dr. Abed Chowdhury is a researcher on heredity. With a team of Australian scientists, he discovered the fish (independent seed) gene. He also invented red rice and colored corn. Colored corn, which is anti-diabetic and anti-cancer, is discussed worldwide. He is currently researching high yielding rice production and future food security in Australia.